Milestones for the Airbus A330neo, with a customer A330-900 handed over and the A330-800 in flight testing. Mark Broadbent reports 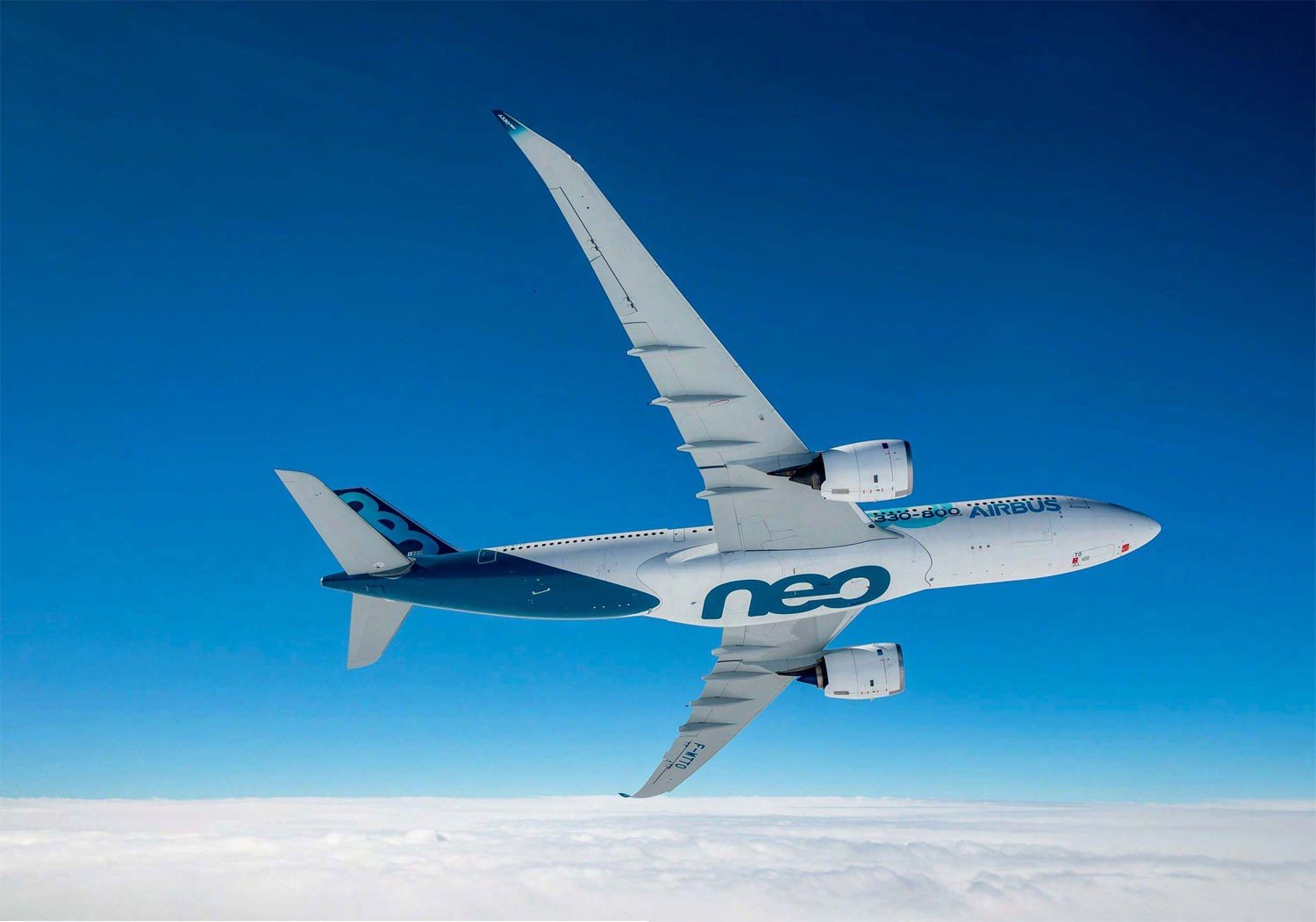 The A330-800 flight test aircraft F-WTTO (msn 1888) photographed during its maiden flight on November 6, 2018. This aircraft is now undergoing 300 hours of testing to certify the variant.
S Ramadier/Airbus

Aware it needed to maintain its presence in the segment for small to medium twin-aisle airliners with 250 to 300 seats, and conscious of looming demand for replacing older aircraft in this size category, Airbus launched the A330neo (new engine option) family in 2014.

On launching the A330neo, Airbus planned for a late-2017 entry into service (EIS), but with the A330-900 only starting flight-testing then, CS-TUB’s handover was around a year behind that schedule. TAP was scheduled to put the A330neo into service in December 2018 on transatlantic routes from its Lisbon base, the first being São Paulo. Two more A330-900s were due to be delivered to TAP by year-end.

Late deliveries of Rolls-Royce Trent 7000 engines, one of the main differences between the A330neos and their A330-200 and A330-300 predecessors, have delayed EIS. A backlog of around two dozen near-complete A330-900s has built up at the Toulouse Final Assembly Line during 2018, with the initial aircraft for customers such as Azul Brazilian Airlines, WOW Air, Delta Air Lines, Air Mauritius, RwandAir, Thai AirAsia X and Air Senegal all awaiting engines. A330-900neo in mid-2019.

During a recent nine-month earnings call with investors, Airbus Chief Financial Officer Harald Wilhelm disclosed that Airbus expects Rolls-Royce to supply only ten Trent 7000s by the end of 2018, meaning there will be five A330neo deliveries by the end of the year.

The TAP handover happened after the A330-900 received its extended twin-engine operations clearance to operate up to and beyond 180 minutes’ diversion time (ETOPS 180) from the EASA on November 22. (The regulator’s type certificate data sheet notes the ETOPS 180 clearance is limited to 500 flight cycles.)

Airbus was expecting the A330-900 to receive US Federal Aviation Administration type certification and ETOPS 180 approval by the end of 2018, which will enable TAP to start A330-900 services to North American destinations. Delta, the only A330neo customer in that region so far, said in November it expects to receive its first four A330-900s from its order for 35 in early 2019.

The company says the A330neo will burn approximately 25% less fuel per seat and compared to the A330ceo will offer 14% better fuel burn per trip, 400 nautical miles (740km) more range and 5% lower airframe maintenance costs, thanks to an updated scheduled maintenance programme that includes fewer tasks, longer intervals and reduced man-hours for engine pylons and some wing sections.

The manufacturer says the A330neo burns 14% less carbon dioxide per seat compared to the A330ceo, and that it is 25% below the CAEP/6 standard for nitrous oxide emissions and 16.5 decibels below ICAO’s Chapter IV aircraft noise regulation. Airbus also claims the A330neo has a 15% lower direct operating cost per seat than the 787, with the A330-900 having a 7% lower cash operating cost (COC) per seat than its direct competitor, the 787-9, and the A330-800 having a 6% lower COC per seat than its direct rival, the 787-8.

The Rolls-Royce Trent 7000 engines with their large 112in (280mm) fan diameters are the most noticeable visual change from the A330ceo. The engines have a slowerrotating front fan with a bypass ratio of 10:1 compared with the typical 5:1 ratio, a new ‘zero-splice’ inlet, a composite nacelle and a fully faired pylon.

Other differences are wider wings (a 64m/209ft span compared to the A330ceo’s 60.3m/197ft 8in) featuring composite Sharklets, a 3D-optimised twist to create a smoother profile, a composite upper belly fairing and reshaped slats and flaptrack fairings. Composites are now used for the slats, rear pressure bulkhead and aluminium alloys for wing stringers and skins. The engine bleed air system is fully electrically driven, rather than pneumatically driven as on the A330ceo.

Operators will be able to switch between WVs with a ‘dynamic payload’ capability, enabling users to optimise for weight flight by flight and switch the MTOW as payload and range requirements adjust between different routes.

There are what Airbus calls enablers to maximise usable cabin space. The lower-deck mobile crew rest compartment has been relocated and the aircraft has the Space-Flex rear lavatory and galley and the Smart-Lav “optimised lavatory” arrangement. These two concepts, initially developed for the A320, enable operators to install additional revenuegenerating seats or increase the area between seating rows and provide additional stowage capacity.

Despite all these differences, there is similarity to the A330ceo. There is 95% spare parts commonality, the dynamic payload capability described earlier is already in operation on the A330ceo and the numerous systems introduced to the A330-200 and A330-300 recently as part of an ongoing incremental development programme have all crossed over to the A330neo. 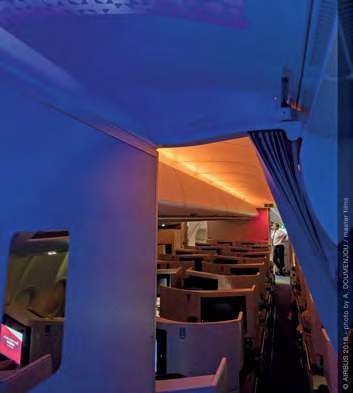 The version of Airbus’ Airspace cabin concept for the A330neo includes adjustable LED lighting and a customisable entrance area.
A Doumenjou/Airbus 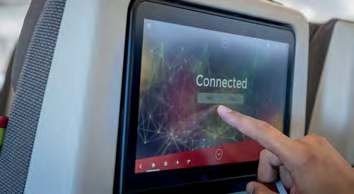 Passengers have a new in-flight entertainment system with HD video, 3-D capabilities and touchscreens.
A Doumenjou/Airbus 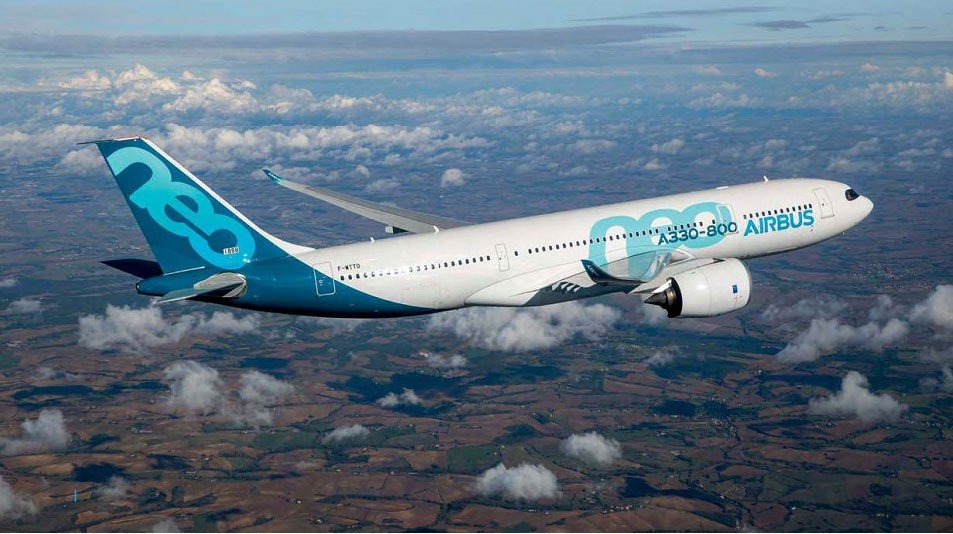 The A330-800 had only eight orders at the time of writing, but Airbus believes there’s a large A330-200 replacement market for the variant.
S Ramadier/Airbus

How will it be used?

These configurations, combined with the new technologies bringing the performance improvements, are designed to provide airlines with a small to mediumsized widebody able to serve their breadand- butter trunk routes more efficiently than previous-generation aircraft in the size category.

Many operators will use A330neos to replace those previous-generation aircraft, such as 767s and 777s. Delta, for example, is set to use the type mainly to replace 767- 300ERs on some transatlantic and transpacific routes, the airline recently saying the aircraft “provides compelling operating economics, superior fuel performance and the range and coverage for our transoceanic needs”.

AirAsia, which has ordered more examples than anyone else by some margin with its 100-aircraft deal, will use its A330-900s for growth, using the aircraft’s superior economics to resume lapsed long-haul services operated from 2009 to 2012 by the A330ceos of its AirAsia X long-haul unit.

The group’s Chief Executive Officer Tony Fernandes commented earlier this year: “It is clearly the right aircraft for us to expand efficiently.” AirAsia X is due to receive its first A330neo in Q4 2019.

For large airlines, having different-sized aircraft is an important part of their route planning, as it enables them to move equipment around their network and provide an optimal number of seats for a route at any one time.

Airbus has configured the A330neos to meet this need, with the A330-900 optimised as a low seat-mile cost midsize widebody for popular trunk routes and the A330-800 positioned as what Airbus calls an “entrylevel widebody” able to try out new routes. This continues an approach established with the A330ceo: a baseline model (A330-300) complemented by a shorter-fuselage, longerrange variant (A330-200).

There is a further notable aspect to the A330neo’s position on the market. In its latest 20-year Global Market Forecast, Airbus amended its aircraft classiications to small (100–240 seats), medium (250–300 seats), large (300–350 seats) and extra-large (350-plus seats). The relevance of this wider strategic marketing move for the A330neo is that the family is grouped in the ‘medium’ category with the A321neo. Both aircraft are now promoted together; the idea is they form a team ofering complementary seating, payload and range capabilities to suit airlines’ needs across 200 to 300 seats. 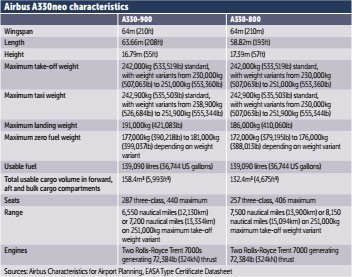 Engine delivery delays held up the A330neo’s delivery to TAP, which was due to put the aircraft into service in December.
A Doumenjou/Airbus

Business for the A330neo has been relatively weak so far, with only 242 sold in the fourand- a-half years since its launch. Despite the AirAsia and Delta orders in 2018, the A330- 900 lags its direct competitor, the 787-9, of which 790 had been sold by November 2018, according to Boeing orders and deliveries data. The 787-9’s higher number is partly to be expected because it has been available for longer, but the Dreamliner has still edged its European rival in recent contests. In April 2018, American Airlines ordered 47 more 787s, while Hawaiian Airlines and Vistara recently both chose 787-9s over A330neos, with Hawaiian cancelling a previous agreement for A330neos to switch. Airbus continuing to sell the A330ceo to provide a bridge in production to the new generation might have diluted demand too.

More broadly, lower Jet-A1 prices in the last couple of years have made it cost-efective for operators to retain older widebodies for longer, quenching their thirst for more fuel-eicient newer aircraft. Boeing has experienced slow sales of its 777X (only 340 orders in six years and none since mid- 2017) for the same reason.

However, Richard Aboulaia, Vice-President Analysis at the Teal Group consultancy, thinks Boeing’s pricing of the 787-9 has been the decisive factor. He told AIR International: “If the two aircraft were head to head in pricing that would still leave space for the A330neo. For some routes, particularly transatlantic and intra-Asia, the A330neo is just as good.

“But Boeing is being very aggressive with 787 pricing and success is feeding success. As they ramp up to a remarkable 14 per month production rate, they can get even more aggressive [on price]. Competing with a four-per-month programme like the A330neo gets very diicult, especially for a last-generation airframe.”

Notwithstanding the slow sales so far, Airbus of course remains confident of new business. The company believes the A330neo is entering the market at just the right time to ride an upcoming wave of replacements for 20-year-old airliners in its size category.

The 787, however, might not be the A330neo’s only competition. It is widely speculated Boeing could launch a new midsize airliner in 2019 and Airbus itself is studying evolving the A321neo including a further stretch. If those developments happen, further questions about the A330neo’s sales prospects over the long term are likely.

With the EIS dates of any newcomers still some time away, however, demand for aircraft already available could rise, especially if operational costs and fuel prices were to increase and make older equipment in service more expensive – and, ultimately, the large global stock of ageing 250–300-seaters will need replacing at some point. Will Airbus’ refreshed twin beneit?